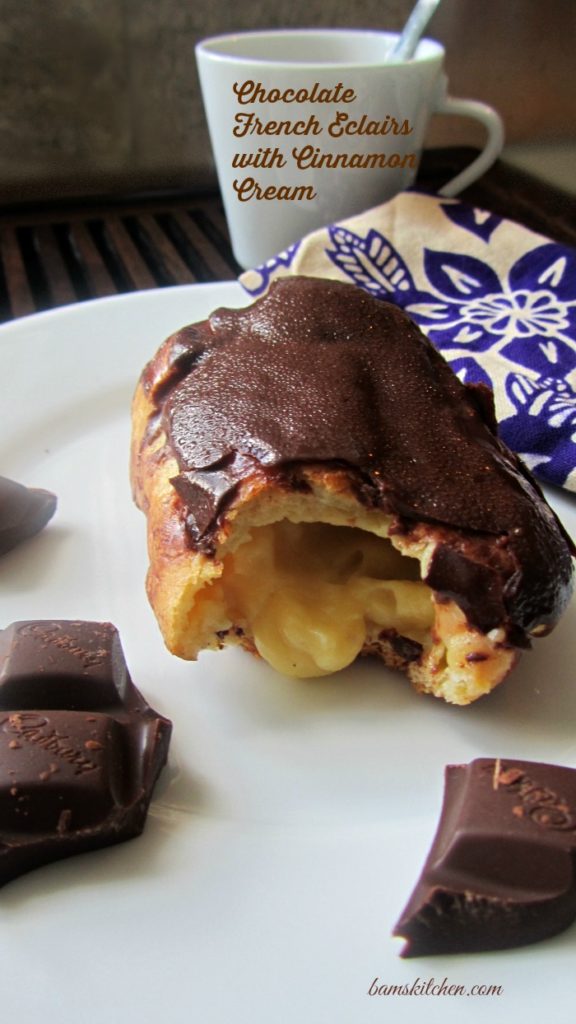 Chocolate French Eclairs with Cinnamon Cream have a delightful little crunch as you bite into the flaky choux buns filled with rich and creamy vanilla cinnamon pudding. Learn fast and easy short cuts to get this classic dessert on your table in less than an hour. 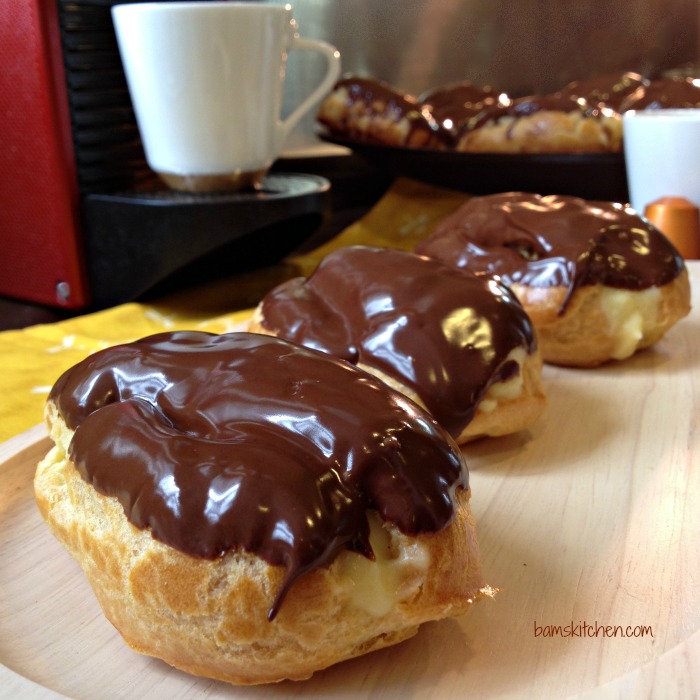 Stress levels have hit the all time high here at our house with both kids on the exam homestretch.

The low carb diet just had to go out the window for a moment as we needed something that could get them going towards the finish line. You can do it boys!!!

My youngest son showed me a photo of the perfect food to help him get through the study slump. He wanted chocolate French eclairs. 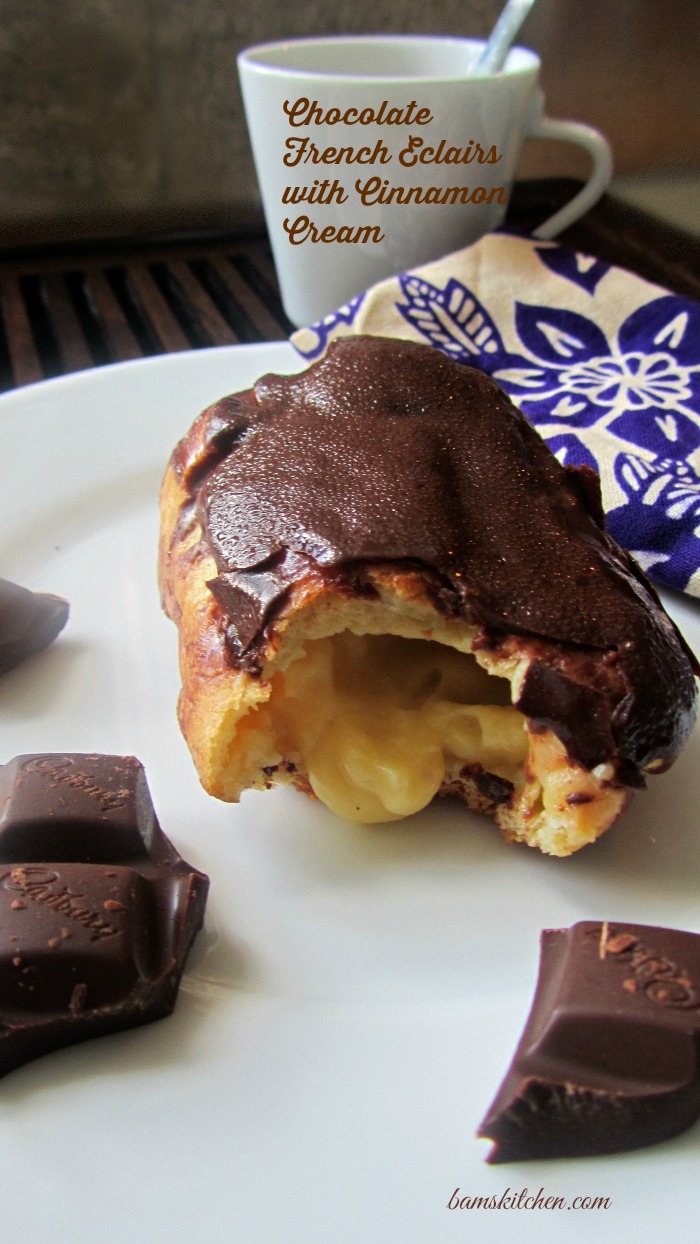 Chocolate French eclairs are not low-fat, diabetic friendly, low carb, paleo friendly, vegan or gluten-free. However, chocolate french eclairs are the perfect study food. Chocolate French Eclairs are a perfect bolus of the exact amount of sugar and carbs to keep the brain and belly happy but are not too heavy. Now don't get me wrong, the best weapon you can keep in your auxiliary is to eat nutritious and healthy meals but there is just sometimes when your soul craves more.

Your brain does something strange when it is in the study mode as it is on overdrive and needs some extra TLC. Your brain requires glucose to perform its many function and especially when you are stressing it to the max while cramming 2 years of education into it. 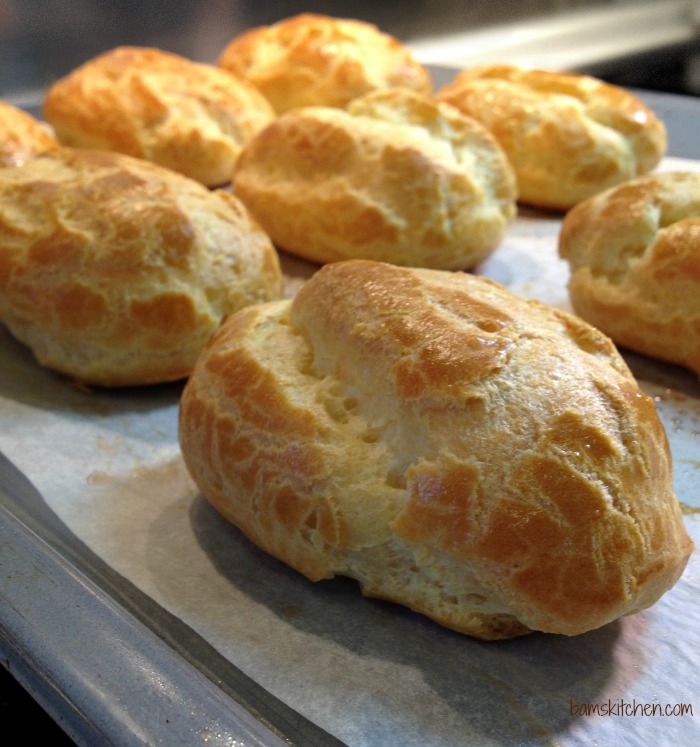 Glucose is essential for keeping the neurotransmitters in the brain at peak levels and this is best done with healthy foods that slowly release glucose steadily like salmon or oatmeal. However, psychologically your brain that also is in control of your will power and in this study slump, it is going to need more than a carrot on a stick to get you there.

As a matter of fact, these kinds of highly stressful situations always go a little easier with a little chocolate on board. Better yet a chocolate glazed choux bun filled with delightful vanilla cinnamon pudding. (I thought you might appreciate the humour of this next photo with my rigged up pastry bag using a ziploc bag and a Wiltons flower decorating tip taped together with blue tape. Real upscale kitchen classy...) 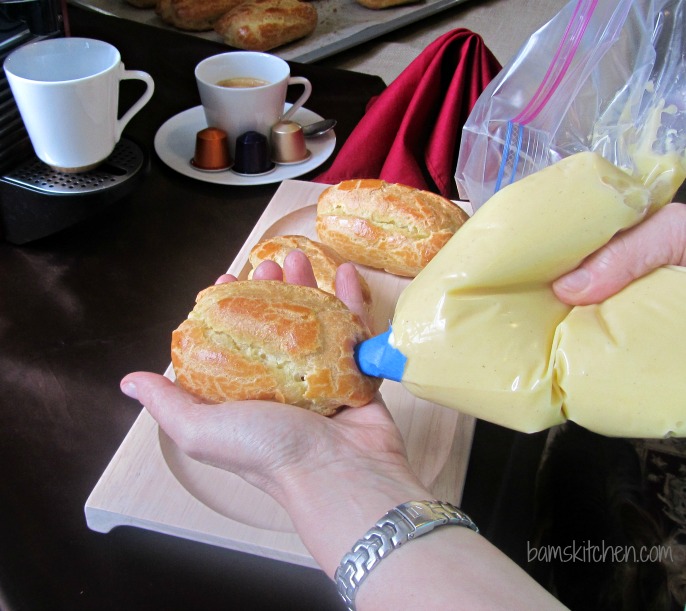 Now there is nothing like a little Chocolate with cinnamon to get your taste buds going and your brain synapses firing. The Aztecs were brilliant putting cinnamon in chocolate. Just love those flavor combinations.

There is one more essential item that takes this dessert over the top and that is a cup of rich and delicious espresso. When you are burning the midnight oil, there is nothing like a little jolt of Nespresso to put a little spring in your note taking and revision.

Now don't be silly, I am not giving my teenagers espresso, that is for me. My husband and I both love our little Nespresso Coffee maker. Making espresso has never been so fast, delicious and convenient as having this little nespresso in our home. Nespresso tastes and smells like it is made in a professional coffee shop. 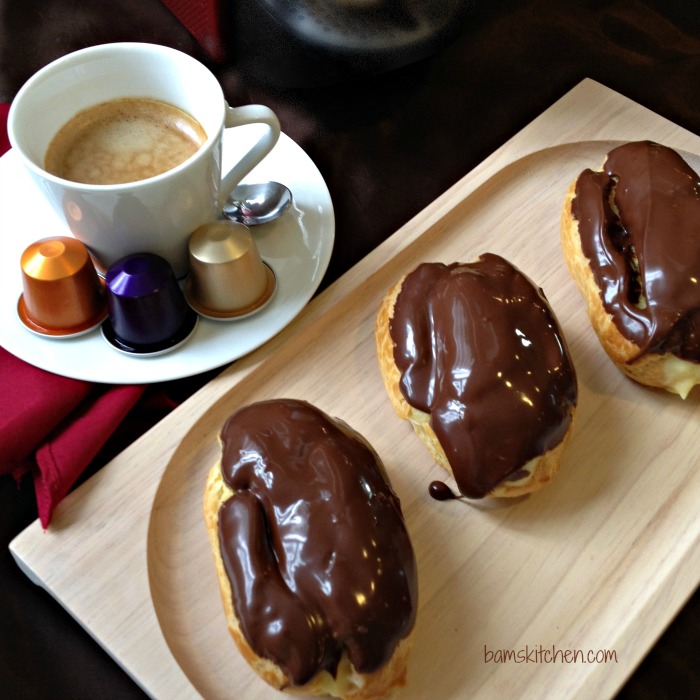 Does anyone else out their own a Nespresso coffee maker? For years we had a Saeco Italian espresso maker and I loved it but it was a lot of work. You had to grind the coffee, constantly clean out all of the intricate parts and the challenge of needing expertise to make the perfect froth in your milk. It took several years of practice to get that under my belt and then one day it broke.

My husband ran out the next day to purchase our cute little red Nespresso and we are delighted with getting to try so many different types of coffee. He even purchased one of the little special milk frothers and we love dollops of freshly frothed soya or regular milk to make lattes or cappuccino. 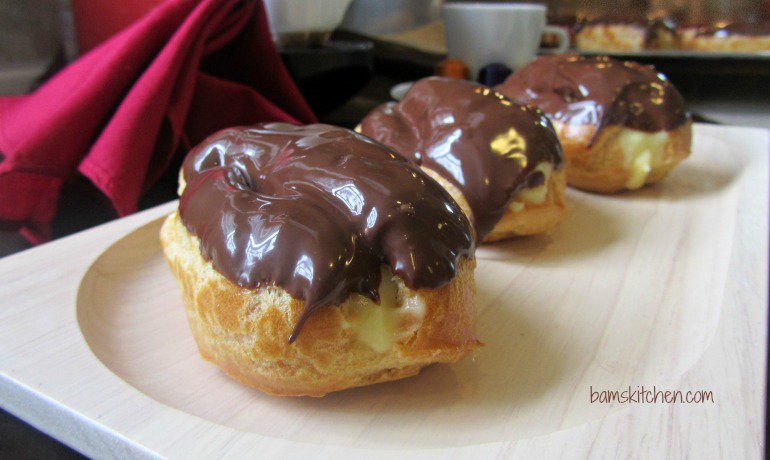 I used the Food Network' recipe for Chocolate French Eclairs but had to make a couple of changes. I added a dash of cinnamon to the vanilla pudding. I made everything else exactly the way it was noted on the directions but the chocolate sauce turned out far to runny and thin for my liking. So, I simplified the whole process and just melted some chocolate in the microwave and dipped each eclair in it and was done. 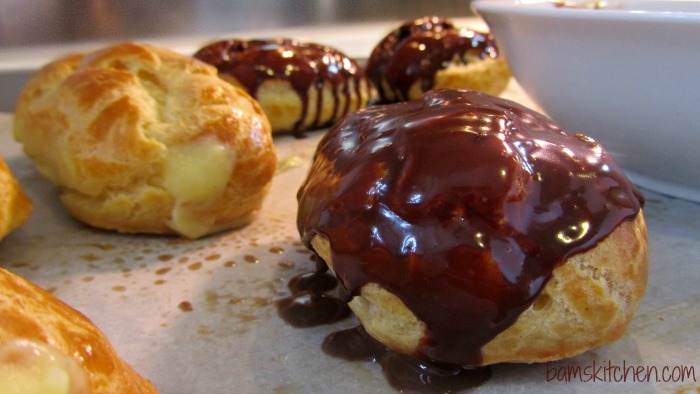 Making homemade Chocolate French Eclairs step by step with this food Network recipe can be a very long and painful 3 hour and 45 minute baking process. However, if you take our shortcuts, you can have these delicious little Chocolate Eclairs completed in about 50 minutes.

I did not bother making my own homemade custard  but instead used an instant vanilla pudding and added a dash of cinnamon and this also saved some eggs for breakfast and I could use my almond milk in the mix. You could use any flavor of pudding you like such as chocolate or maybe even butterscotch or any flavor you desire or maybe go dead easy and buy one of those spray whipping cream in a can and call it a day. If you add our Easy Microwave Chocolate Pudding to this Chocolate French Eclairs with Cinnamon Cream recipe you have just nailed it! 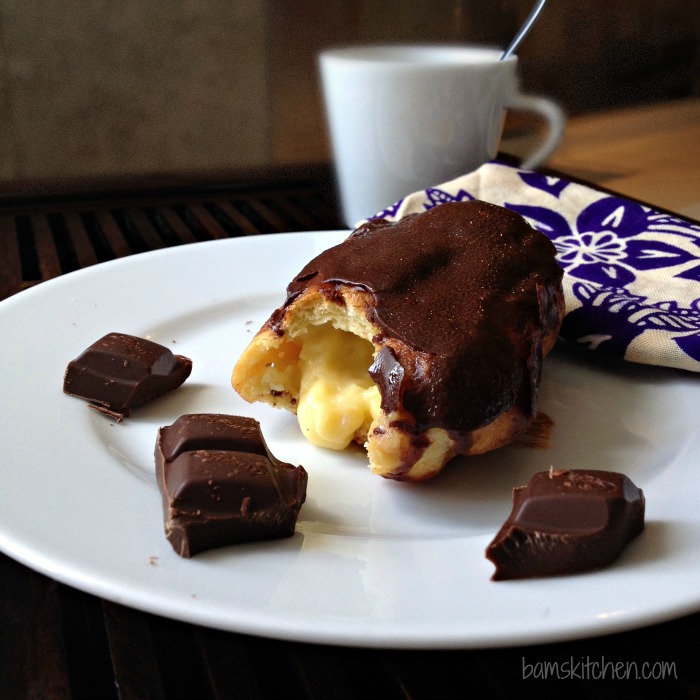 How to make the Chocolate Topping for Eclairs

Do not bother making the chocolate sauce just melt chocolate in the microwave and you are in business.One thing I would not change about this recipe is the choux as it is perfectly delicious. The choux  is a light pastry dough used to make profiteroles, croquembouches, éclairs, French crullers, beignets, St. Honoré cake, Indonesian kue sus, and gougères and I just love that flaky and delicate dough.

With a creamy espresso coffee in one hand and a delicious Chocolate French Eclairs with Cinnamon Cream in the other, even learning Chinese seems like a breeze. 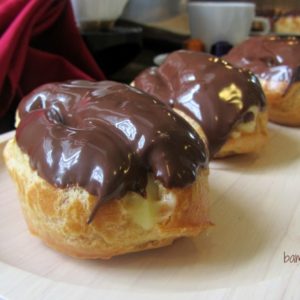 US Customary - Metric
Prevent your screen from going dark

You can also make your own homemade Easy Microwave Chocolate Pudding for the inside of the eclair. So delicious!