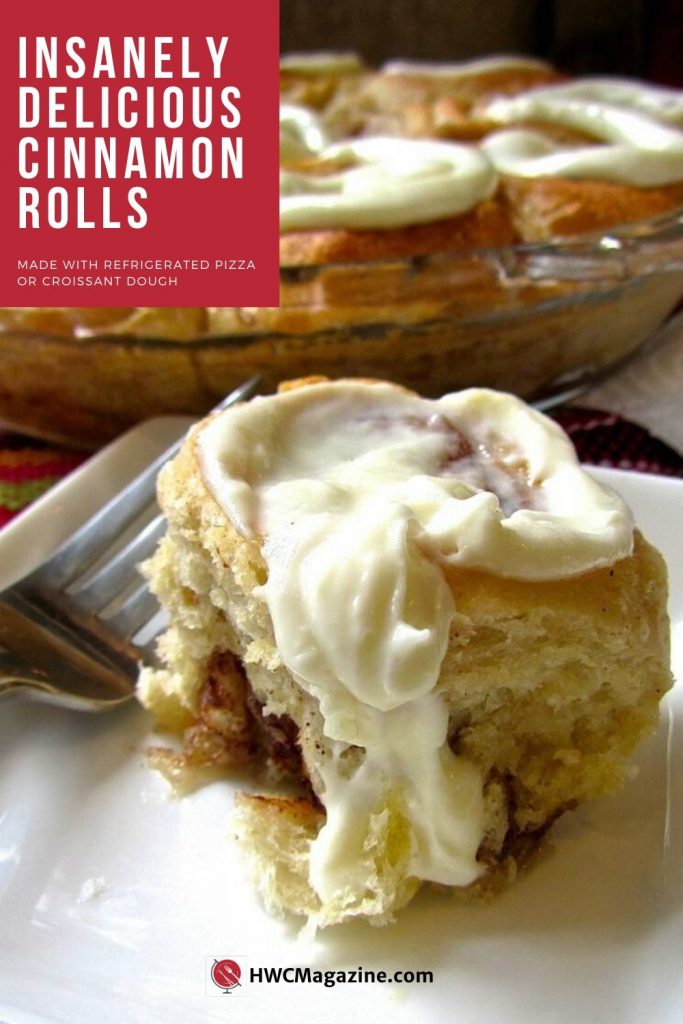 Insanely Delicious Cinnamon Buns with swirls of soft dough oozing with buttery sugar and of course drizzled with nothing else but a rich and delicious cream cheese icing. (Shortcuts using refrigerated pizza or croissant dough) 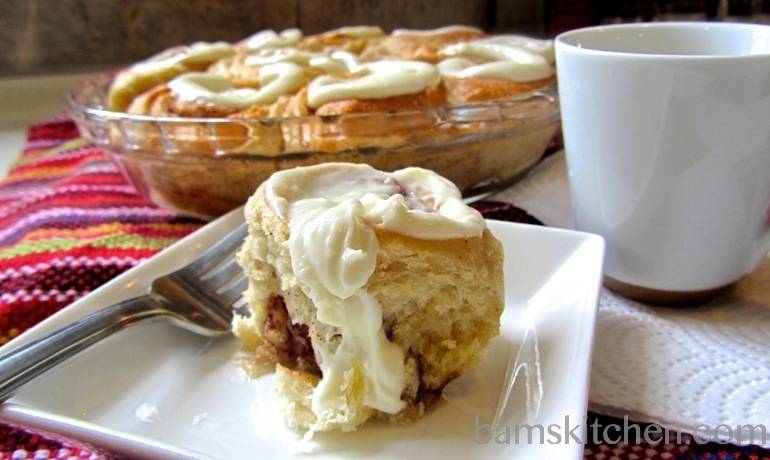 Close the front door and join me for a quick cuppa coffee or tea and some insanely delicious cinnamon buns with us! 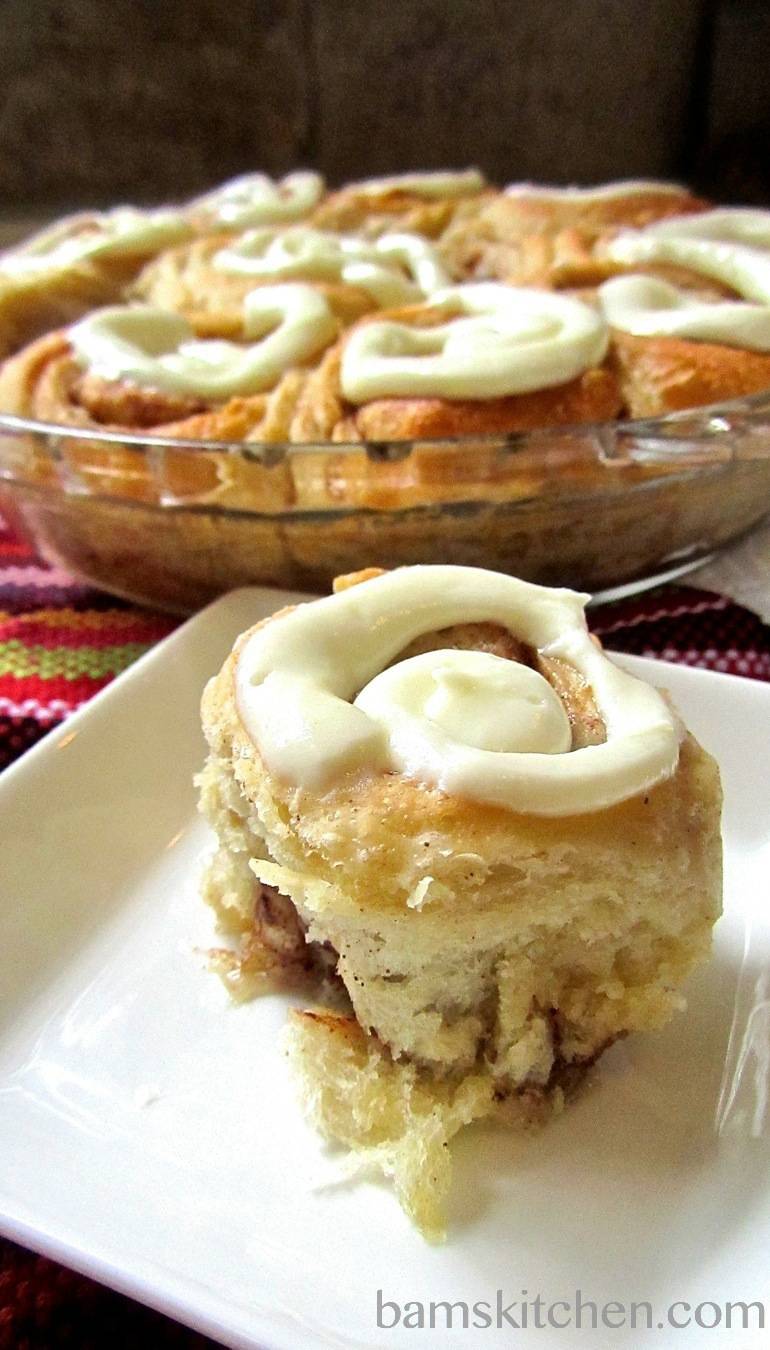 Oh my goodness these are good!

What do you with extra pizza dough? You can make bread sticks, pretzels, or just heck of a lot of pizza but why not think of breakfast in the morning. Yep, you heard me right I used pizza dough to make these delicious cinnamon buns. 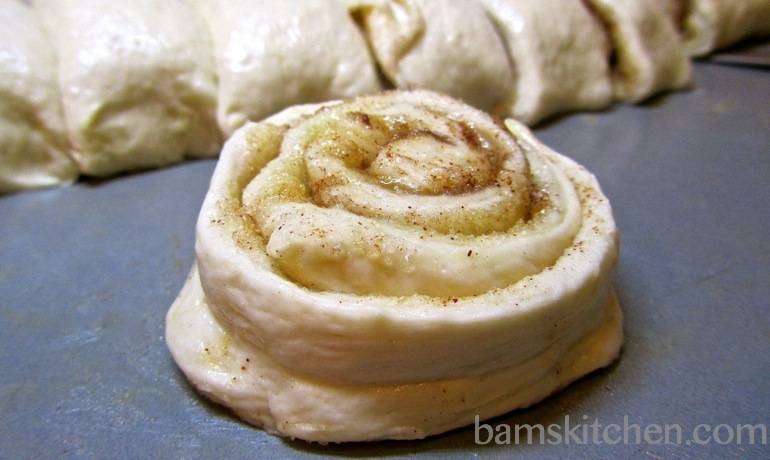 The boys and I made pizza for dinner last night. I started making Bobby Flay's pizza dough recipe when but then I remembered his recipe makes more of a pan style with thick crust. It a great little pizza dough recipe but I prefer more of a thin crust pizza. Waste not want not, so I decided to make breakfast instead. 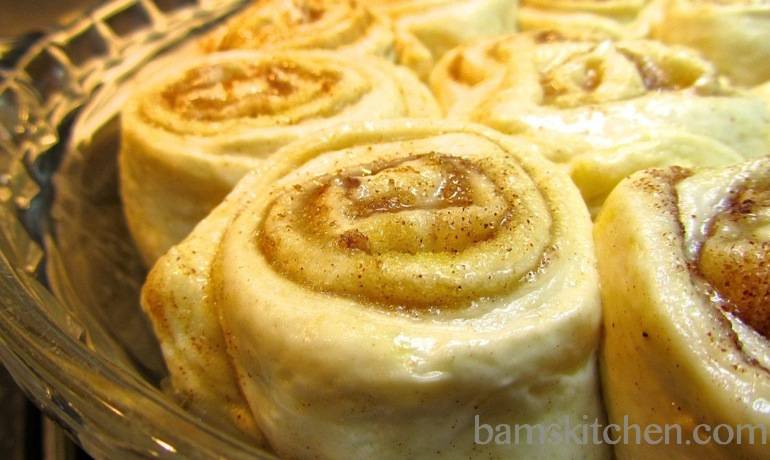 I hopped on over to Paula Deen's recipe to check for ingredients and cooking times for cinnamon buns. I realized then, I was fresh out of brown sugar so I substituted granulated sugar and cut way down on the amount of sugar as I do not like my sweets too sweet. 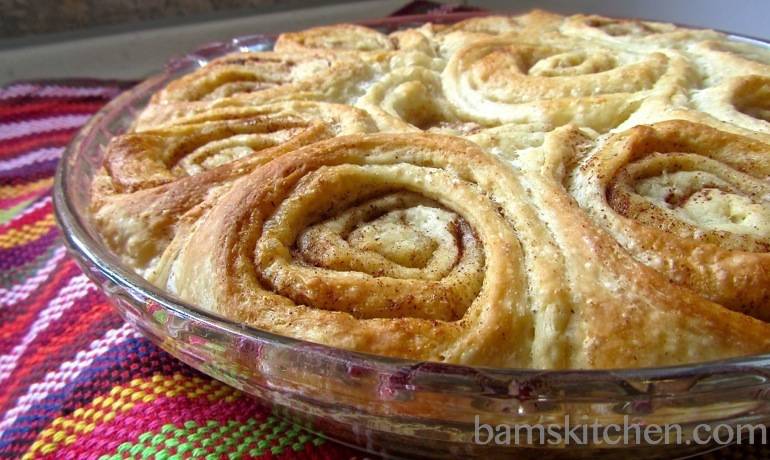 I pulled and rolled and spread my pizza dough on the bottom on a huge baking pan. I drizzled a little butter and sprinkled the sugar and cinnamon and rolled into a tight little roll. I cut the roll just like I do sushi. I first cut it in the middle and then cut each piece in half and then each half in a half again and then following by cutting each half into 4 pieces. 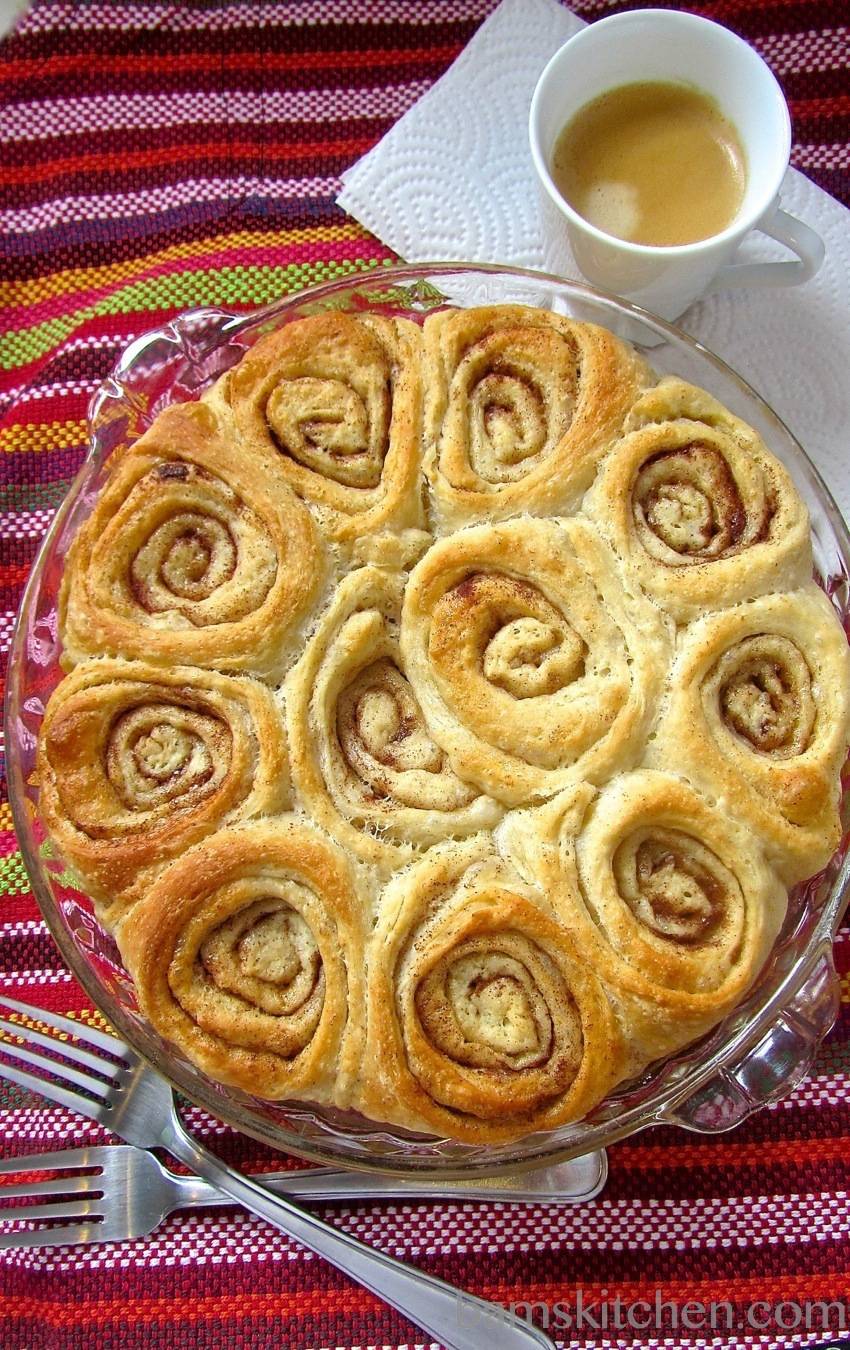 I looked up at the clock. I had started making pizzas for my boys around 6pm and the last came out of the oven at around 8:30pm and there was no way I was going to be baking these delicious cinnamon buns late into the evening so opted to just refrigerate my cinnamon rolls over night. You can just halt the rising process by putting the pre-made cinnamon rolls in the refrigerator overnight with plastic wrap. This is perfect if you are planning on hosting a gathering in the morning. You can do all the prep work the day ahead and just at the last-minute fill up your house with the sweet and buttery smell of cinnamon rolls baking in your oven just before your guests arrive. 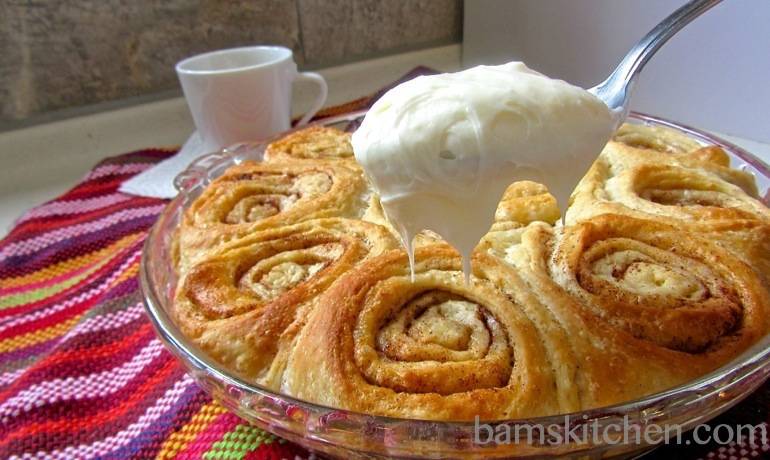 The next day, I grabbed a few things I needed for the market and can you believe they were all out of icing sugar. Plan B, I had a can of white frosting at home that I was saving for a special occasion as this is a hard to find item in Hong Kong. However, I could not think of a better occasion then the celebration of enjoying hot out of the oven insanley delicious cinnamon buns. I whipped in some cream cheese and vanilla and a little cream and it tasted perfect, maybe even better than the ones made with icing sugar. 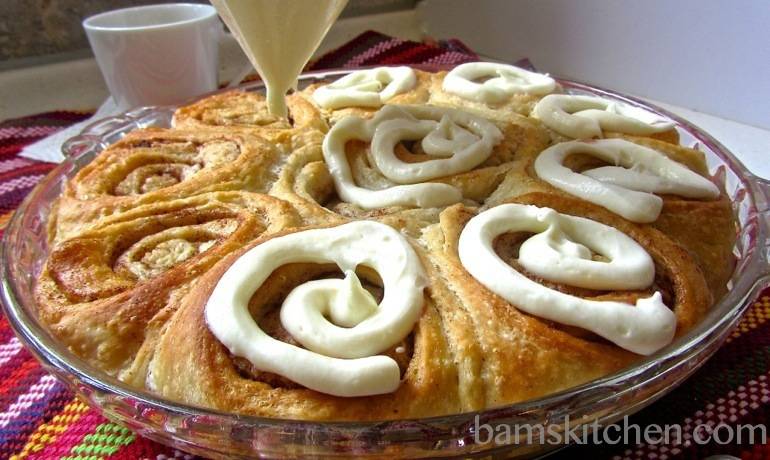 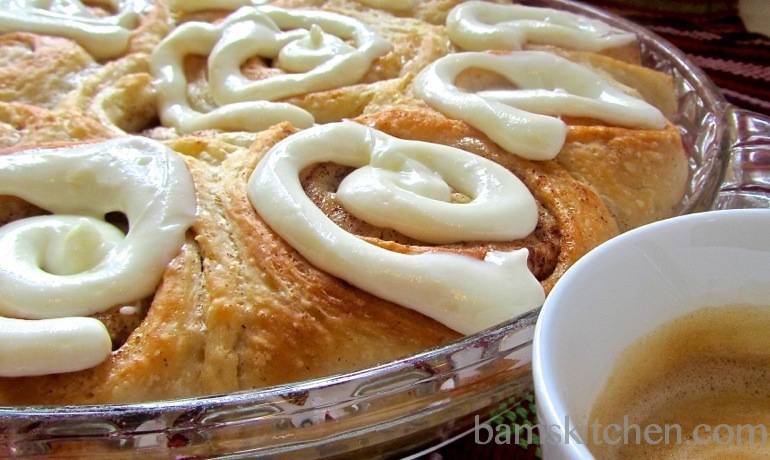 I put my delcious buns in the oven for about 35 minutes until they were golden brown and while they were still warm slathered the rich and delicious cream cheese icing on top. 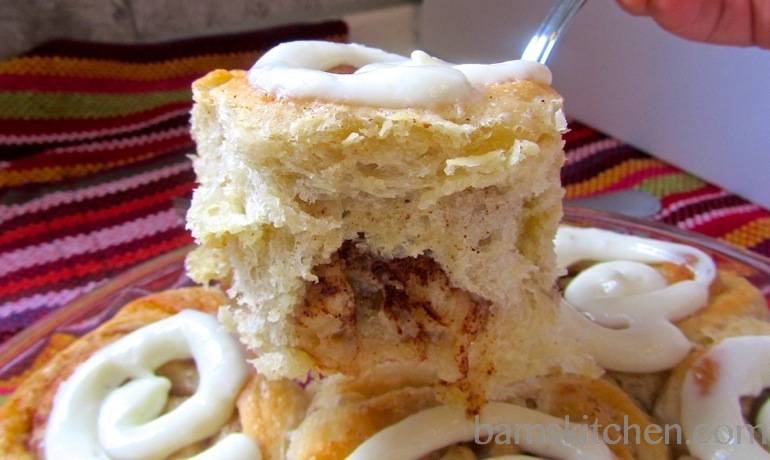 Let me tell you these were the best Bobby Flay pizza failure, don't have all of Paula Deen's ingredients problem, don't have enough time let them rest in the refrigerator overnight insanely delicious cinnamon buns I ever tasted. 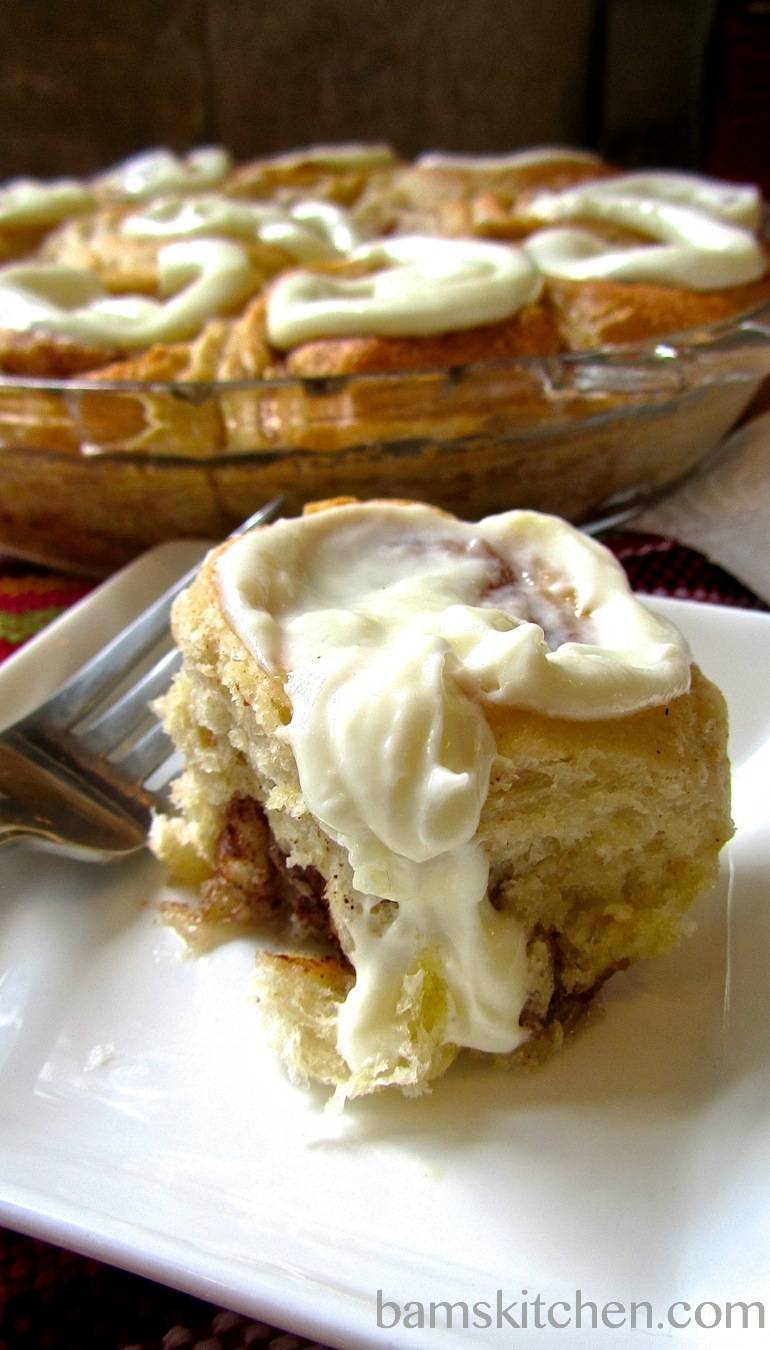 They were chewy, buttery, delicious and love, love, love that cream cheese icing. You may not be able to stop at one and that is a good thing as this recipe makes 18 insanely delicious cinnamon buns. I made a pie tin and another small pan full and they are going fast. The word is out. I have the kettle going, so please come on over and enjoy some cinnamon buns with me. Please rescue me before I finish off that pan. 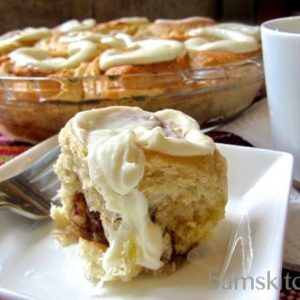 US Customary - Metric
Prevent your screen from going dark

Refrigerator Croissant rolls make for a fluffy bun but you can also use refrigerated pizza dough as well.