You are just going to love this muffuletta pizza as the gluten-free crust is crunchy around the edges and chewy on the inside. The mile high toppings and zesty sun-dried tomato pesto base make you forget all about cheese. Well,  that is for me at least.  However, if you do not have a dairy issue then some crumbled feta, mozzarella or gouda cheese would be amazing on top of the gluten-free Muffuletta pizza. If you want to go vegan, swap out the ham and salami with some grilled eggplant and zucchini and this little pizza will rock your world. 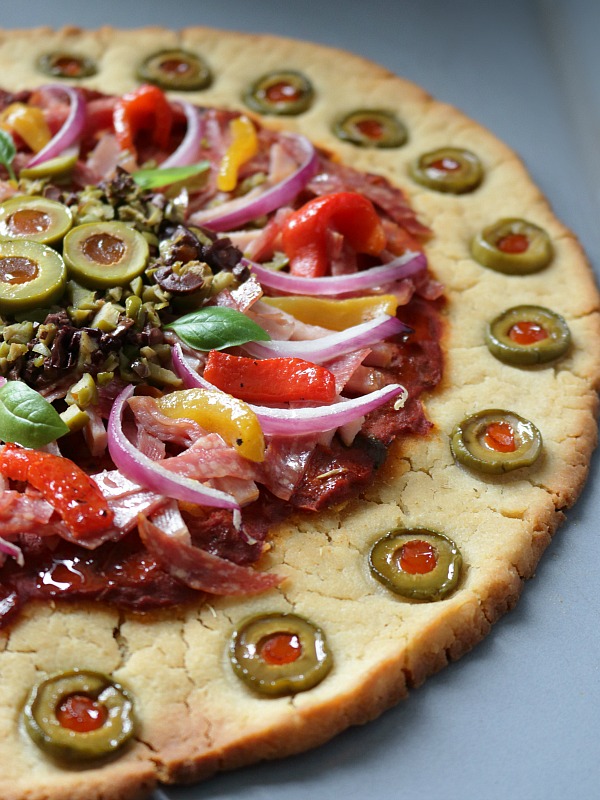 The Italian Immigrants in Louisiana knew how to really celebrate with their delicious muffuletta sandwiches traditionally made with focaccia bread, loads of cheese, ham, salami, olive pressed sandwich. I made a huge 3 foot traditional muffuletta sandwich for my boys with all the fixings and all of that CHEESE. Then I started having a pity party.. Oh woe is me no wheat, cheese or eggs... One big huge pity party!!! 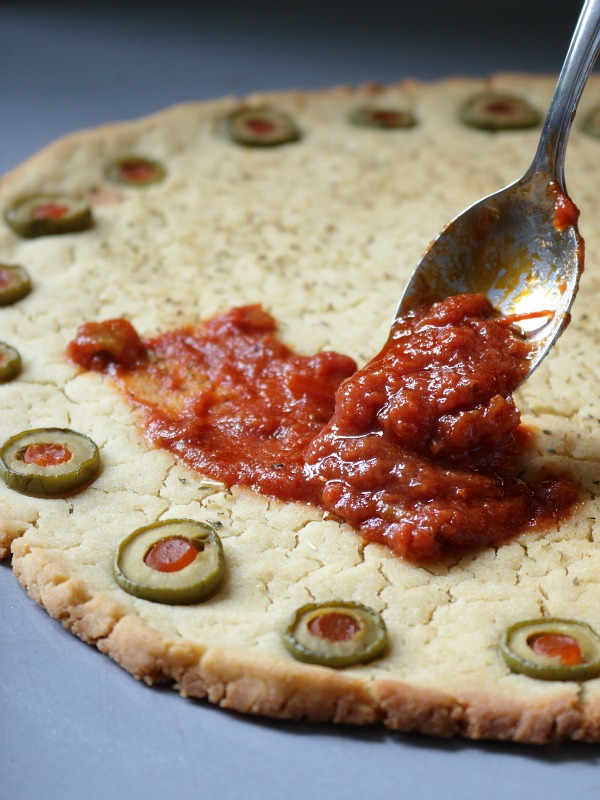 I began staring at the HUGE muffuletta sandwich that weighed in around 5 pounds, that was getting pressed in the refrigerator with a couple of really heavy books. My personal pity part was on full alert and was going to just settle out for a cold boring salad with some of the muffuletta toppings...  but I wanted something a little more fun. Something, I could really sink my teeth into! After all, it is Friday night so why do I have to eat a salad, it's the weekend and this girl needs a little fun. 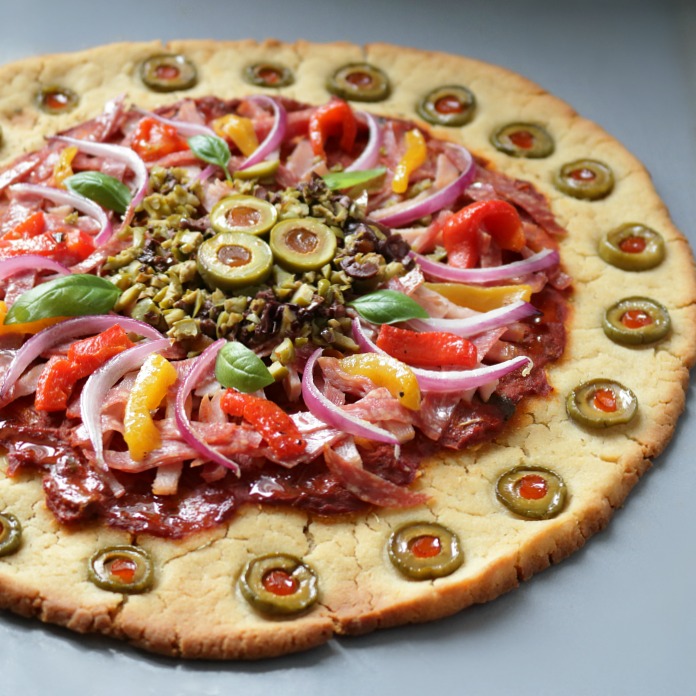 Brilliant idea came from all of the woeful pity party as I found a box of gluten-free pizza crust in my pantry. So it was settled a Gluten-free Muffuletta Pizza for me. Yeah!!! 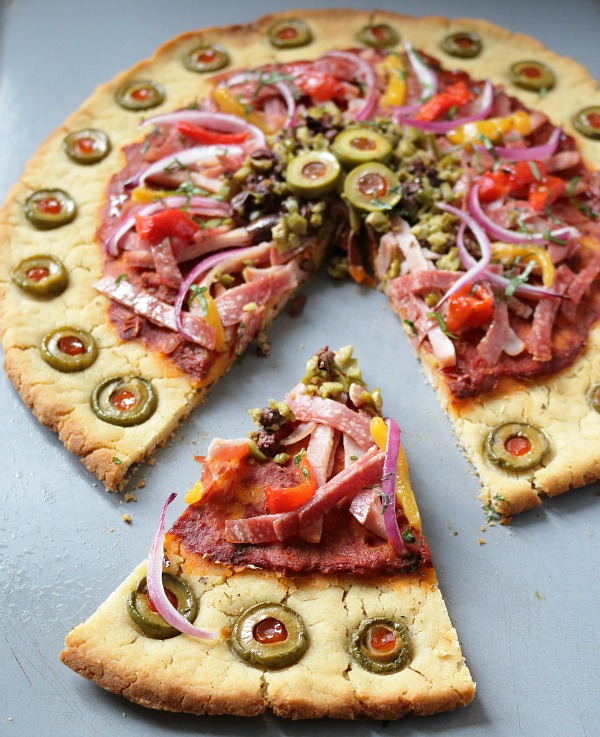 Well, the events after that decision were not as easy as you might think. I know your thinking just dump the box of ingredients with some liquid ingredients mix and your done. WRONG!!!

My first attempt to creating a gluten-free crust did not go well. It was an EPIC fail! I was pressing out the pizza dough into a pan just in front of my kitchen window.  A huge big gust of wind caught my Thai basil plant came it crashing down from the window and landed on top of my gluten-free crust. There was no 3 second rule when you have soil embedded into your pizza crust. Another brief pity party....but the thought of cold plain salad was not going to happen tonight.

My second attempt went much better as I had closed up the windows and turned the aircon to avoid all risk of a repeated epic fail. I used a delicious recipe from She Likes Food with a few changes and it was absolutely delicious, crunchy edges and chewy crust. Thank you She Likes Food you were a lifesaver! One of the best gluten-free crusts I have ever had. I say this was truly one happy accident that needs to happen again. 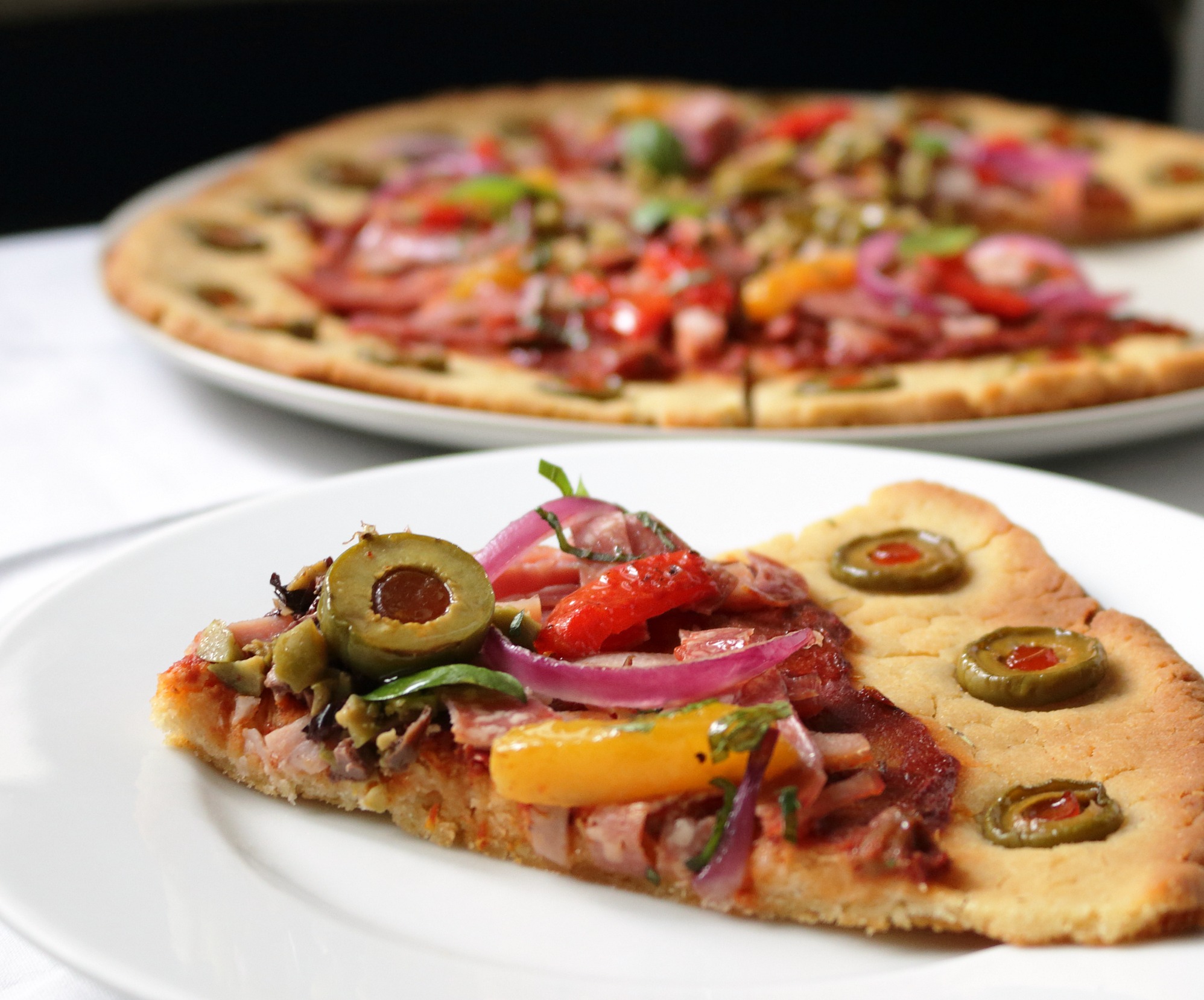 There are going to be lots of holiday gatherings over the next few weeks. Trust me "You can't live on turkey alone", so this is fun and easy Muffuletta pizza is just your ticket for a social gathering. Toss a quick salad on the side and your sorted. 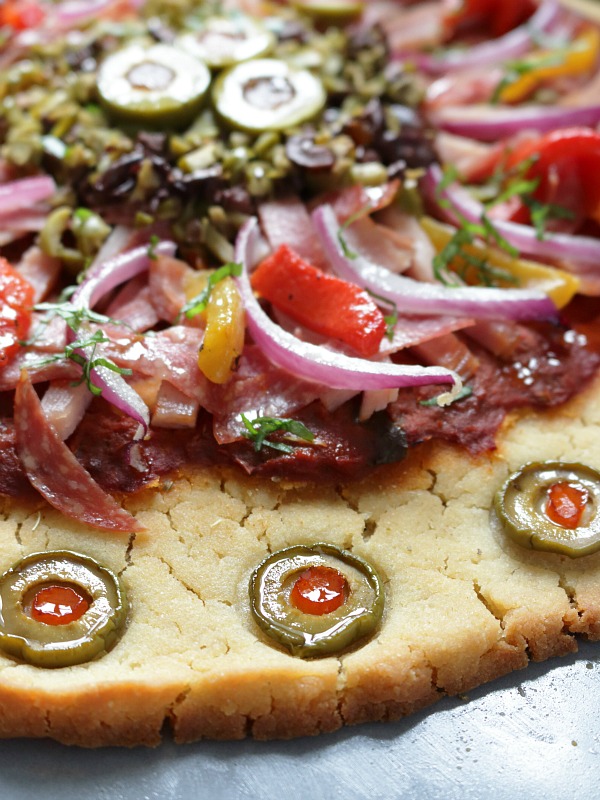 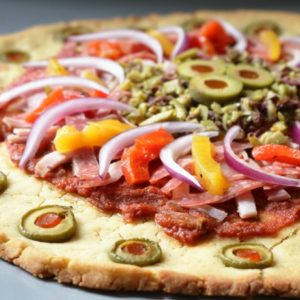 If you do not have a dairy sensitivity, feel free to top with cheeses of choice.

Join our Healthy World Cuisine medical editors (trained in both Western and Eastern Medicine) and learn how to EAT your way around the WORLD from the comfort of your own kitchen. Grab free health tips, recipe ideas, meal plans and gain a better understand how eating choices can affect your health. Be the healthier and happier YOU!
Read More…